Fun at the Petroglyphs 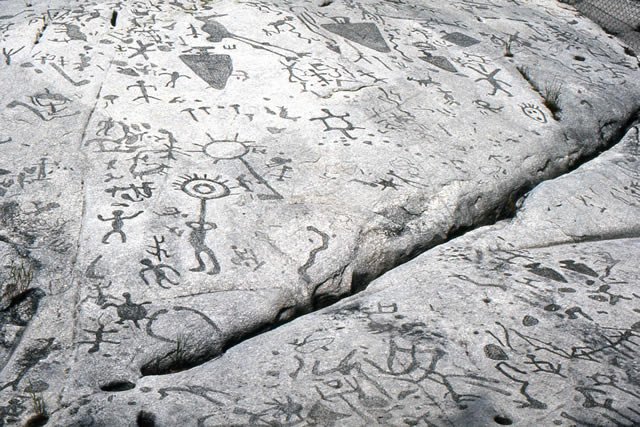 The past two Tuesdays, participants (staff, students and volunteers) of TRACKS summer camp program made their way to the Petroglyphs for a day of learning and having fun. On our second visit we were joined once again by Dorothy Taylor and by youth from the Nogojiwanong Friendship Centre who got to participate in the day with twelve other campers as well as volunteers and community visitors.

The campers and friends got to see the amazing Petroglyphs and were part of a ceremony with Dorothy Taylor, setting the tone for a respectful, positive camp week. They heard stories about the Petroglyphs and what some of the symbols meant and how Turtle Island (North America) was created. Also they listened to Dorothy sing a few songs- while she was singing the songs one of the instructors gave a offering to the rocks as a way of saying Miigwech (thank you).

After lunch TRACKS took a little adventure to McGinnis Lake. While on their journey to the lake, the campers got to check out and learn about the different elements of Creation and how they work in relationship to each other. When they were on the hike the TRACKS instructors asked youth to watch for any animals, insects or plants that they could record and put in their take home booklets. At the lake they found all sorts of different insects and plants which were on the rocks near the lake. The campers looked at the insects as well as plants and tried to identify them. TRACKS staff loves learning from our campers- the kids are all so very knowledgeable and could identify many of the species.

So what does it mean for a lake to “turn over”, the kids wanted to know? A meromictic lake (A lake that doesn’t turn over) has layers of water that do not intermix. In an ordinary, or holomictic  lake, at least once each year there is a physical mixing of the surface and the deep waters. This mixing can be driven by wind, which creates waves and turbulence at the lake’s surface.  Since the lake doesn’t mix the deep water with the surface water it doesn’t turn over.

The TRACKS instructors had different knowledge to teach the campers about the lake, some had science knowledge while others had Indigenous teachings to share about the land around the lake and Petroglyphs. All of the TRACKS group loved the lake, because it was very beautiful and different than the lakes they were used to.

Overall, the day at the Petroglyphs was fun and full of knowledge. TRACKers finished off the day back at Trent University, cooling down and playing sponge dodge ball. It was a great day that taught many people new things about the Petroglyphs and McGinnis Lake.