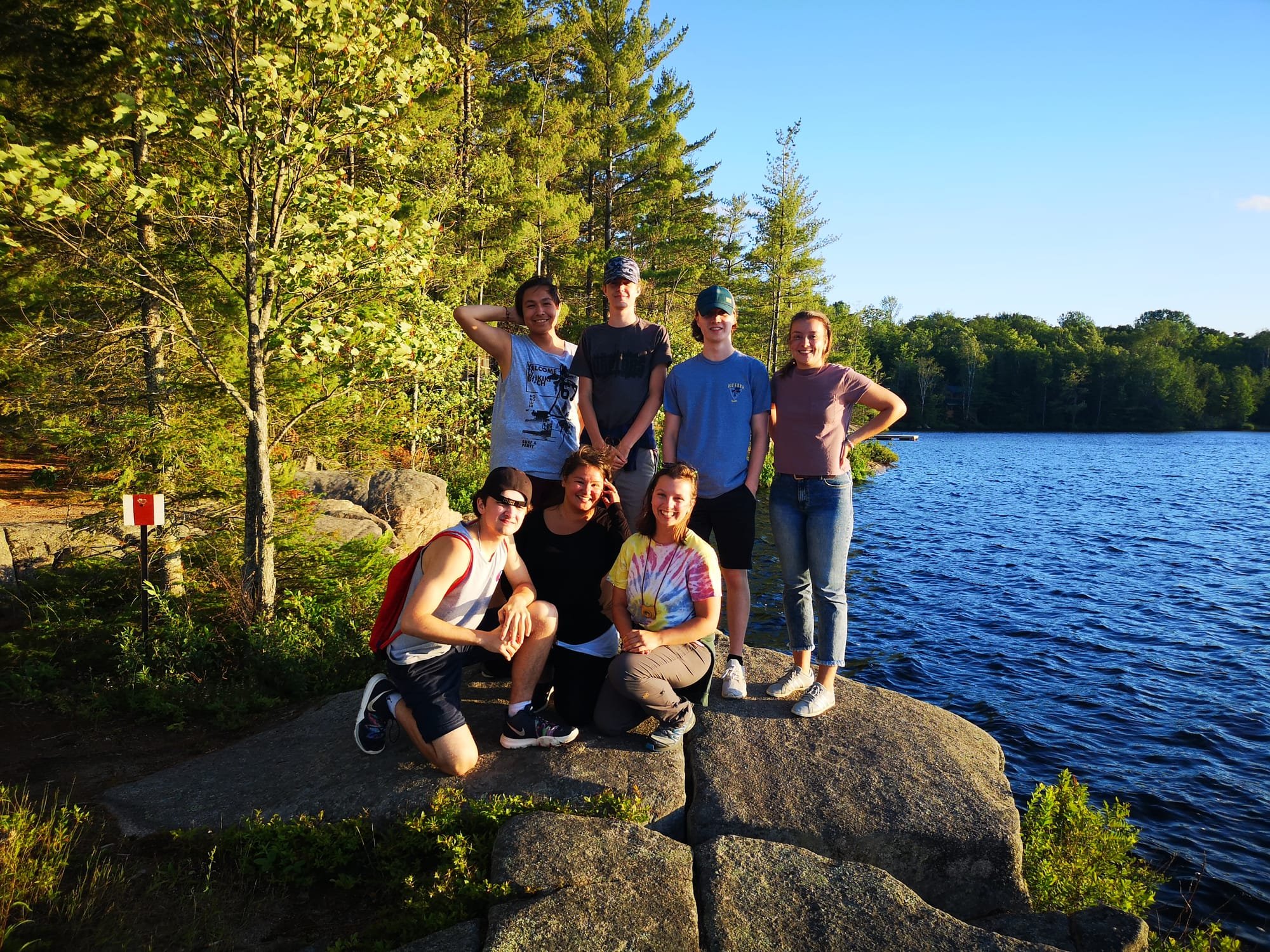 It's #throwbackthursday and we're reminiscing about our Summer with our Oshkwazin Youth Ambassadors' final reflections on their most memorable experiences from their time working with TRACKS. Read on to learn about some of the fun leadership-building activities we all did together!

This summer at Tracks has been extremely impactful and has offered me so many learning experiences that have taught me so much. However, one of the points where I have had the most fun was the Amazing Race, that took place at the Bark Lake camp. The amazing race is obviously a show, however it was adopted and adapted by the Bark Lake staff to suit a younger audience. Although me and my co-workers are not necessarily the demographic it was meant for we still had a blast. The idea of the game was to find little red pieces of wood, with a letters a symbols on each, that were scattered across the Bark Lake campground. Then once you and your partner found the correct code you reported back the the officiator who would give you a task to complete in order to continue on to the next code. The teams were Jo with Kaden and Me (Gabe) with Geordan. Once the game started me and Geordan had a hard time finding the first code which put us behind in a deficit. However, with junctures of perseverance me and Geordan nearly came back, finding teamwork in extreme sweat and tears. The Bark Lake experience was not what we were expecting, but with things such as nearly coming back from such a deficit or having a communal basketball game where no one really one, Bark Lake brought us together as coworkers and as the TRACKS family.

My favourite trip with TRACKS over the summer was our trip to Ottawa. Even with the earlier morning I think everyone still had a fun drive up. After we checked in to our hotel, we went to Actua headquarters for a coding workshop. The workshop was run with small robotic toys called spheros. The three Actua staff gave us an introduction to how they work and then set up an obstacle course for our spheros. On my first try, I found the right coding and my sphero landed on the finish line and everyone began to ask if I’ve done this before. In the late afternoon we had dinner in a restaurant that reminded me of Pop’s off of Riverdale. Then we went back to the hotel to switch into our formal attire which definitely had a different meaning for everyone as we ranged from a suit to a pair of Gap shorts and a t-shirt. The occasion was an evening trip to the Canadian Museum of Nature. When we got there we purchased tickets to their two special exhibitions Butterflies in Flight and Flight in the Age of Dinosaurs. My favourite of the two was the Flight in the Age of Dinosaurs which was a virtual reality flight simulator. It was my first time using virtual reality so it was an amazing experience for me. After the museum our group of seven endeavoured to complete an escape room only making it out with a fourth hint and five extra minutes. When we got back to the hotel our night consisted of some swimming and a game of Charades followed by a good night's sleep. With another early morning our last plan for the trip was a stop at the Canadian Museum of History. We had the pleasure to see another special exhibition called Unceded - Voices of the Land. This exhibition showed the importance of Indigenous thinking and spirituality in the world of architecture. To finish our trip we got a picture together in front of Parliament and made our way home. With this being my final blog I want to thank TRACKS for an amazing 2019 summer!

My time with Tracks this summer is coming to an end, and I have been thinking alot about all the amazing activities we did together. Through out this whole summer there have been so many amazing memories made, but my favourite in perticular is the time we went tree top trekking.

The day was amazing, it started with us doing some fun icebreakers with O&E. I had alot of fun with these icebreakers as they didnt make me feel uncomfortable while keeping me engaged with the game. One of my favourite Ice breakers was when we put a tennis ball on a metal loop with strings attached, the goal was to get the ball from one cone to another without letting it fall. We split into two teams, Oshkwazin versus O&E, the two teams battled it out in the first round, with O&E putting up a strong fight, the mighty Oshkwazin took the lead and won the first round, the second round was close, but the amazing might and will of the Oshkwazin was too much for O&E. The third and final round was just for fun, yet the competition was still strong, however this round we had to bring the ball over to the cone with our eyes closed, and one person giving directions. This was a true test of teamwork, and only the best would win. As soon as the round started both teams started out slow, but with the realization that each groups teamwork was incredible the pace of the race increased. It seemed once one team was ahead the other would catch up and pass, what should have been a 2 second walk felt like it took seven minutes. Though the race was always bumper to bumper, the victor was the team that had been on top the whole race. Oshkwazin managed to sweep the slow and steady O&E through superior tactics of, walking faster.

After the amazing tennis race we participated in a survival challenge. The goal of the game was to see how well we would do in making a shelter, fire, and finding water with limited resources. The other Oshkwazin boys and I made the shelter, and if im being honest, it was the best. We had a chair (big rock), and successfully made an amazing shelter from sticks, and a tarp. I had fun making the shelter with the other guys, and looking back on this memory that was the first team bonding we had done together, which makes it an even better memory to look back on.

Once we had finished our team bonding, and amazing survival challenge it was time for the activity we had all been waiting for, Tree Top Trekking. We started with putting on the equipment, which was definitely the hardest part of the experience… Once that was done we did an introduction to the activity, all the do's, and dont's. After that we did a practice course that would prepare us for the real deal. The first courses were a lot of fun, and it was great to watch the people in front of you execute their version of the best way to pass the course. As the courses got more challenging it was less of a goof around, and more of a focus on not falling (even though we were attached to a wire via harness). Until we reached the hardest course of them all, reaching a max height of 70 feet the final course was called the Timberwolf, and the average time was 45 minutes, and I was determined to do it in 30. The course challenged me in more than a physical way, it was also a mental battle as well. At the end of the course I was sweating buckets, and it took me 40 minutes, so not that bad, but then one of the instructors told us that another instructor did it IN 5 MINUTES. I was amazed. I knew that to do the course in five minutes would take an amazing amount of skills, and tactics. I was just happy I was better than average, even though the thing that really mattered was the amount of fun I had, and for that I’m thankful to TRACKS.

One of my most memorable experiences of working at TRACKS throughout the Summer would be the trip to Ottawa. But more specifically, I enjoyed the escape room we all participated in. It was thrilling to participate from start to finish because in the beginning not only were we handcuffed, but it was pitch black except for the tiny red light indicating that the camera was on so that the supervisor of the escape room could make sure that no one got hurt.

Anyway, after a couple of minutes we found some flashlights which we good and then we found the key to the handcuffs which was even better. After the handcuffs were off, it was so much easier to escape. Soon after, we found a key to a drawer which had a puzzle and the code unlocked a combination, so we solved the puzzle, opened the lock when led to another puzzle and so on and so forth.

The final puzzle was inside a locked crate that we unlocked and we had to match different numbers to different items in the chest and those numbers were the solution to the final lock. We opened it and inside was a big wooden mug with an X on the bottom and a drawer had an X on it too, so we put the mug on top of it. The drawer opened, which made the lights turn on and unlocked the door, letting us escape the escape room!