We are so glad to announce the winners of the Winter Storytelling contest! There were so many fantastic entries, it was very hard to select a winner. We would like say Chi Miigwech to all who entered the contest!

Below are their incredible winter stories! Enjoy :)

Tracks woke up from a long slumber ready to have a nice snack. “I’m hungry!” Tracks said with a tired voice, so he went down the tree to his food supply. When he got down there a big shiver went through his body. “Where did my food go!” he said, he didn't eat it all, did he? He went to the neighbor's beaver and asked “Hey, can I borrow some food just to last me the winter?”. “Sorry” said the beaver “I don’t have much left”. “Oh well I guess I will just go find some more” said Tracks “Are you sure?’ asked the beaver “The wolves have been bad lately.” “I'm sure I'll be fine,” Tracks confirmed. He went back home and got some supplies for his journey. He was ready, he stepped outside and looked carefully for wolves, he heard a howl. “Nah man” said Tracks “I ain't dealing with these guys tonight. I'll leave tomorrow.”

Tracks woke up to the sound of food munching, “What in the world could that be.” He said with confusion. Tracks looked outside to see a deer eating the last pieces of his food. “What do you think you’re doing?” He said with anger. “Uhhhhhhh Sorry?” said the deer with a mouth full of food “Do you want some?” The deer spat out a nut and gave it to Tracks. “No !” said Tracks, he was furious and was thinking of what to do next. Then he got it. “You stole my food so you must not have any either, do you.” asked Tracks “No” said the deer “So you will join me on my journey to go get food for the rest of winter!” exclaimed Tracks “Okay” said the deer “It’s that easy?” asked Tracks “Sure” said the deer “Okay let's get going then, come on. Waaaiiiittt a second, I don’t even know your name.” said Tracks “I Uhh - I don’t have one” said the deer sadly “Yes you do” said Tracks “The one you got from your parents when you were born”. “I don’t remember, my parents left me when I was just a young fawn.” said the deer “Oh, I didn’t know. I’m so sorry. Uhhh, oh I got an idea, what if we make you one like maybe, Ruby, ya Ruby.” thought Tracks “Ya, I like it, let's go with that.” confirmed the deer And with that they began their journey.

Ruby and Tracks started their expedition. First, they would travel through the dark forest. Once they got past that they would have to sneak past the wolf den. After that they would pass the ravine on an old broken down bridge. Then they would face their last obstacle, the frozen lake. With that Ruby and Tracks set towards the forest. Once they got inside they both had instant regrets, the forest was too dark. They could barely see two feet in front of them. They heard noises every step they took. “Wanna turn back” asked ruby “No, we have to keep going,” said Tracks. And two minutes of walking later, they made it out of the forest. Instantly the wolves spotted them. “RUN” yelled Ruby, “Thanks captain obvious” said Tracks. They bolted past the wolf den and headed toward the ravine. “Where did the bridge go? It was here last time.” asked Tracks “Well it’s not here now” said Ruby “So we have to jump. Okay, 1, 2, 3 jump”. As they soared across the ravine Ruby got her front two hooves on the other side but not her back. Tracks landed beside her but didn’t have enough power to lift her up. “Pull” said Tracks “you're almost there” Ruby tried and tried to get herself up, and finally she did. “That was close” said Ruby “too close” “Come on” said Tracks “we need to go to the lake”. They headed towards the frozen lake and started to walk across. “Where are we going exactly?” asked Ruby “Like I know we’re getting food and all but from where?” They walked for a bit in silence but then Tracks spoke. “Well when I was a little chipmunk, I fell from a tall tree. I couldn't move. Then these people came and brought me to their Village. They cared for me and protected me. I go back there for food every winter. They are my friends and kind of my family.” “Wow that's deep”. Said Ruby “I thought we were jus--” CRACK “what was that” SPLASH.

They fell through the ice. It was cold and they couldn't get out, everything went black. Then they heard voices. They woke up next to a fire. It was warm and they were in a wigwam. “We are here,” said Tracks. They both got up and walked outside, the Indigenous people were standing trying to scare off a wolf. The wolf looked at Tracks and Ruby “There you are,” the wolf said, “Come on in, boys!” The other wolves from the den surrounded The Indigenous Village. The villagers fled into their longhouses, trying to escape the Wolves before they attacked the village. Ruby and tracks stayed outside preparing to defend the small town who had saved Tracks' life many years ago. Tracks felt like it was his duty to protect the village. Then An idea struck Tracks,”What if I stick a bunch of nuts into my mouth and shoot the food at very high speeds at the wolves” Tracks said to Ruby “That might actually work” Ruby said “would you want to try that” “I think it might be our best chance” Tracks implied Tracks filled his mouth with Various different nuts. Without notice a wolf started running towards them, Tracks fired everything out of his mouth overpowering the wolf. The wolf ran off far from the village, Ruby cheered as the wolf ran away. “Show them Tracks” cheered ruby.Then another wolf charged at the pair, then another and another charged. Once the people found out what was happening they came to help. They fired their bows at the wolves until all the wolves ran off. “Thank you for helping our village,” the Chief said. “But why did you come back?”. Since Ruby and Tracks could not speak to humans, they rubbed their stomachs to symbolize they were hungry. “Oh you’re hungry” said the Chief “Take what you want and eat.”

Two days later they headed home and Tracks went back to his tree to hibernate and Ruby kept on running.

Title of Short Story: Tracks and the Stolen Nuts

Tracks shoved a juicy acorn into his cheek pouch next to a frozen stream before bouncing away to his treehouse.“Did you come back with a big one?” Plucks, his sister, asked.“I sure do,” Tracks replied, “It’s big, juicy, crunchy… you’ll love it!”“NOOOO!!!” a voice echoed.“That sounds like Butters! He’s in trouble!” Tracks and Plucks immediately scurried towards the basement, where his brother Butters is.“Butters! What happened!?” Tracks started.“All of our nuts are gone! Stolen!” Butters sobbed, pointing at a once-abundant room of nuts, now empty.“Preposterous!” Tracks snarled. “We’ll find someone who did it!”As Tracks, Plucks, and Butters race to the door and into the outside, they are confronted by Mrs. Peppers, a batty old woman, next-door neighbor, and squirrel.“Do you know where my acorns and nuts are?” she asked.“You too—?” Tracks began.“Yeah. Everyone’s nuts are stolen! But I saw who did it: that rabbit Butternut!”“Let’s check!” Tracks complied, and the group, including Mrs. Peppers, raced to Butternut’s burrow, where he was sitting, lazy and sluggish.“What?” he arrogantly said, spraying them with nut breath. And that is all the proof they need.And finally, Tracks forced Butternut to return the nuts to the chipmunks and squirrels with his apologies, and came home a hard-working rabbit. 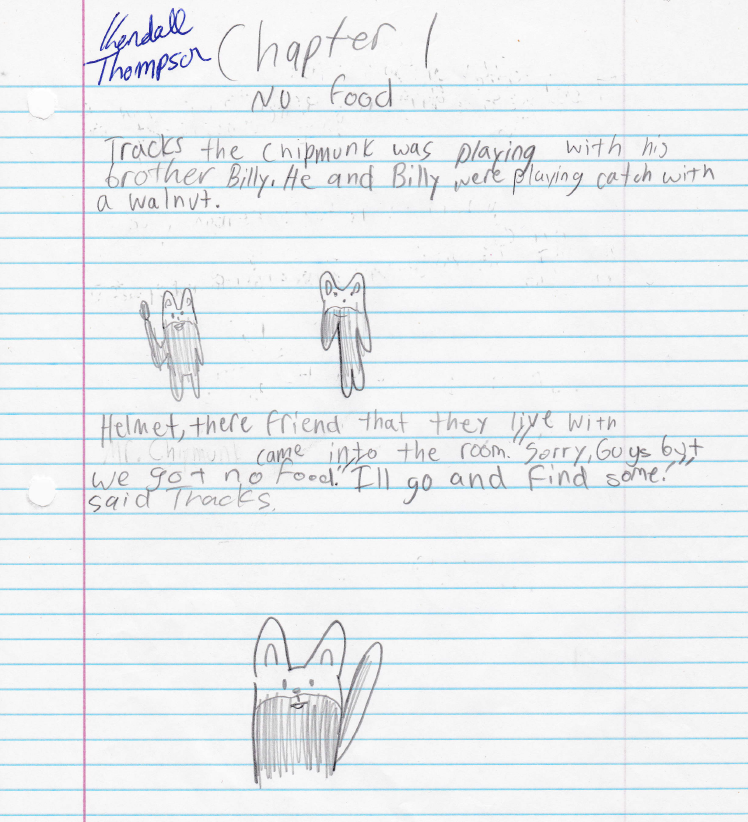 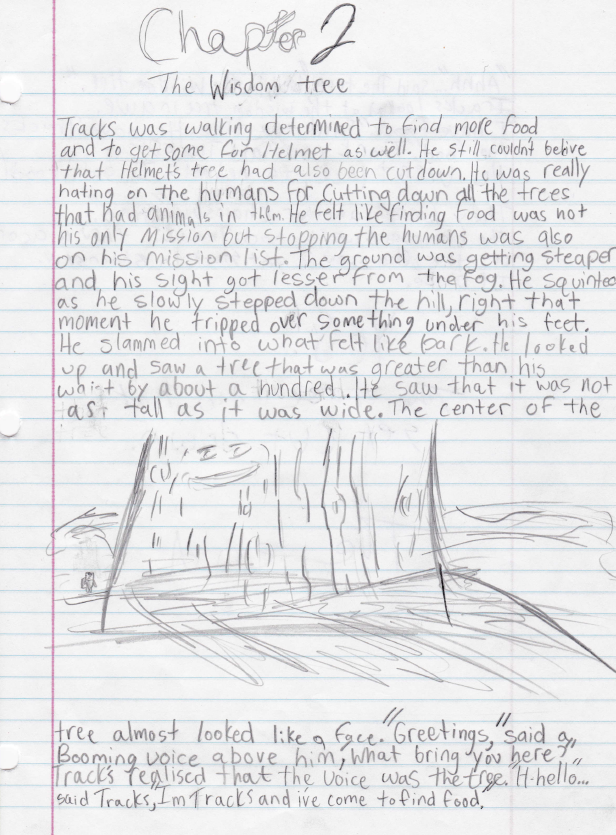 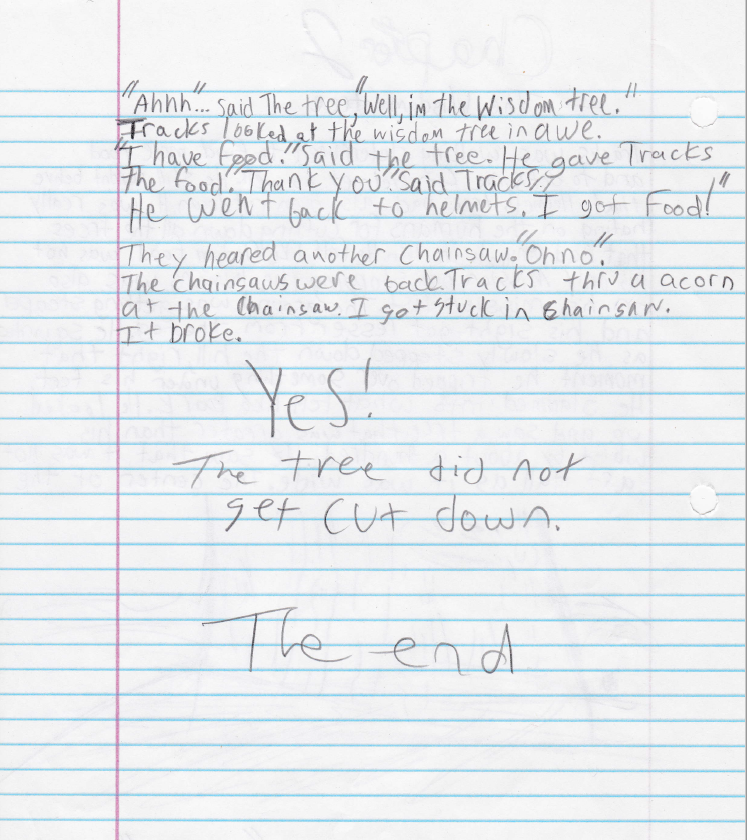