The Otonabee River flows through Nogojiwanong/Peterborough, the place at the foot of the rapids. Otonabee is the anglicized name from the Anishinaabemowin word Odenaabe. In Leanne Betasamosake Simpson’s Book Dancing On Our Turtle’s Back, she discusses the name Odenaabe with Elder Gdigaa Migizi, Doug Williams. He describes the first part of the word ode means 'heart', and the word odemgat means 'boiling water'. When the water boils, it looks like the bubbling or beating of a heart. Odenaabe, "the river that beats like a heart”, referring to the bubbling of the rapids along the river.

The land and waters around Odenaabe have been inhabited by Indigenous Peoples since at least 12,000 years ago when the ice sheets retreated. The landscapes of the area changed dramatically at this time and by 10,000 years ago the landscapes roughly looked like they do today. These lands and waters have always held deep spiritual and cultural meaning for Indigenous nations that travelled through, and lived within this territory.

This area is predominantly the traditional homelands of the Michi Saagiig Nishinaabeg. Treaties with various Indigenous groups emerged in this territory to negotiate and agree to the sharing of the lands and waters here. However, relationships to Odenaabe changed with the increasing number of European settlers and traders. In 1615, Samuel de Champlain came to the area, which escalated warfare between Indigenous groups, with battles fought along the Odenaabe ziibi (river) and Pimaadashkodeyong, Rice Lake.

The most significant change to the relationships with Odenaabe came through the construction of the Trent-Severn Waterway. This construction project was in response to the increasing interest from settlers in the 1800’s regarding the lumber boom, and the desired connections for commercial travellers. The construction took over 100 years locking in the natural flow of ziibi through 50km of constructed canals, and 150 dams. In order to build this, aki (land) and nibi were dredged, flooded, and molested to create a “navigable” water system. The primary use for this system is recreational transportation.

The cost of this construction was the complete disruption of Odenaabe, the relationships it had with its relations like the salmon, Manoomin (wild rice) and eels, and a major disruption to the way of life for the Michi Saagiig Nishinaabeg, which is still felt today.

To learn more about Odenaabe and its relations, please check out these incredible resources: 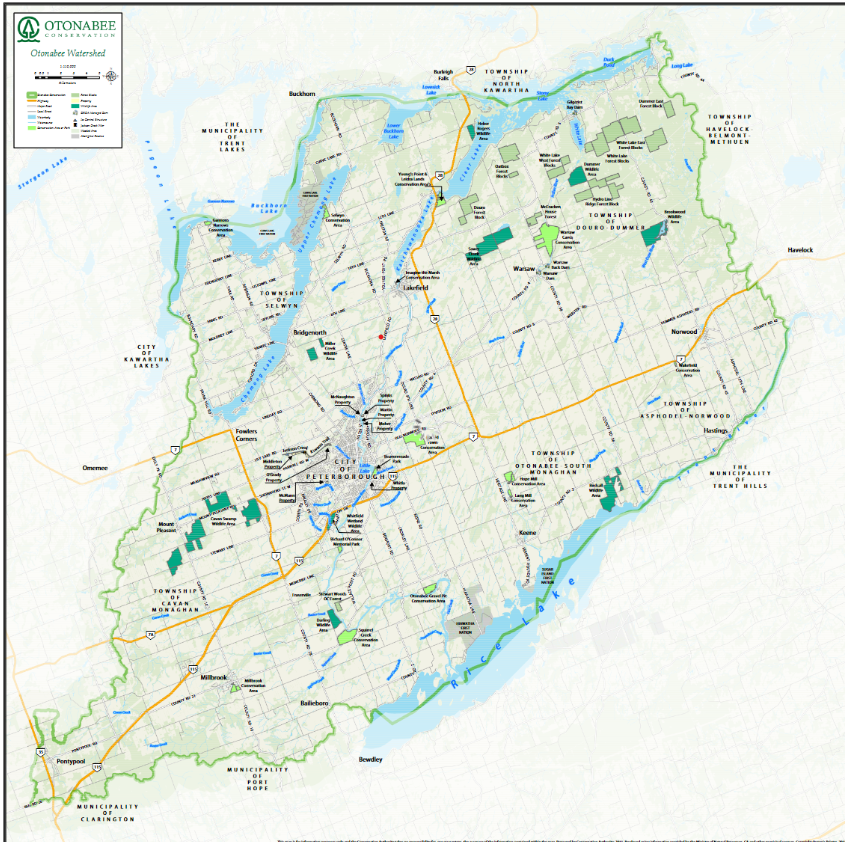 Simpson, Leanne (2011). Dancing on Our Turtle's Back: Stories of Nishnaabeg Re-creation, Resurgence and a New Emergence. A beautifully woven series of stories about the importance of grounding reconciliation in political resurgence and support of Indigenous revitalization of languages, culture, traditions, and governance.

The Truth and Reconciliation Community Bobcaygeon is an organization which aims “to foster and develop respectful relationships among Settlers, Indigenous neighbours and the Land.” They have excellent resources from Michi Saagiig history, protocols and etiquette, current issues, treaty information, etc. https://trcbobcaygeon.org/resources/

Originally aired November 3, 2020. For countless generations, manoomin has been integral to the health and well-being of Michi Saagiig Nishinaabeg. Manoomin harvesting is a timeless, seasonal tradition that transfers cultural intergenerational knowledge. Learn about the spiritual and reciprocal relationships between manoomin and the Michi Saagiig Nishinaabeg. Guest speakers are Gidigaa Migizi (Doug Williams), Dorothy Taylor, Leanne Betasamosake Simpson. Part 1 of a 3-part series aims to provide foundational information about Anishinaabe Manoomin (wild rice) and its importance in the territories of the Michi Saagiig Nishinaabeg. Even though manoomin has been growing in the Kawarthas for at least 4,000 years, many people know little about this nutritious seed and its current revitalization in local waterways.

The Ecology of Manoomin

Originally aired November 10, 2020. Manoomin grows in rich eco-systems. Learn about the biodiversity it promotes, the interconnection among different species, the biology and genetics of manoomin, and the different stages of growth. Guest speakers are Elders Gidigaa Migizi (Doug Williams), Jeff Beaver, and Eric Sager. Part 2 of a 3-part series aims to provide foundational information about Anishinaabe Manoomin (wild rice) and its importance in the territories of the Michi Saagiig Nishinaabeg. Even though manoomin has been growing in the Kawarthas for at least 4,000 years, many people know little about this nutritious seed and its current revitalization in local waterways.

Putting Manoomin on Your Table

Originally aired December 1, 2020. The revitalization of manoomin is intimately connected to issues of Nishinaabeg food security and food sovereignty.  Access to healthy food can address the diabetes epidemic in Michi Saagiig communities. Learn about the health benefits of manoomin. Guest speakers are: Autumn Watson, Daemin Whetung, and chef Janice McCue. Part 3 of a 3-part series aims to provide foundational information about Anishinaabe Manoomin (wild rice) and its importance in the territories of the Michi Saagiig Nishinaabeg. Even though manoomin has been growing in the Kawarthas for at least 4,000 years, many people know little about this nutritious seed and its current revitalization in local waterways.